In what can only be described as another thrilling weekend of racing for Written Tycoon, his juvenile daughter Enthaar produced a stunning effort on debut to record the second quickest time ever achieved, with her three length victory in the G3 Gimcrack Stakes at Royal Randwick in a time of 57.06.

Elevated to favouritism for the G1 Golden Slipper after her effortless win, the Ciaron Maher and David Eustace-trained filly looks well above average.

Bred and raced by Emirates Park Stud, Enthaar is out of the Not A Single Doubt mare Final Agreement, and is likely to head to the Golden Gift for her next start in order to qualify her for the G1 Golden Slipper, to be run on March 20, 2021.

With the commencement of 2021 yearling sales only a few months away, Woodside Park Stud is set to offer a sensational crop of Written Tycoon yearlings which will include the ONLY two yearlings by the Champion Sire out of Not A Single Doubt mares, the exact same cross as Enthaar. 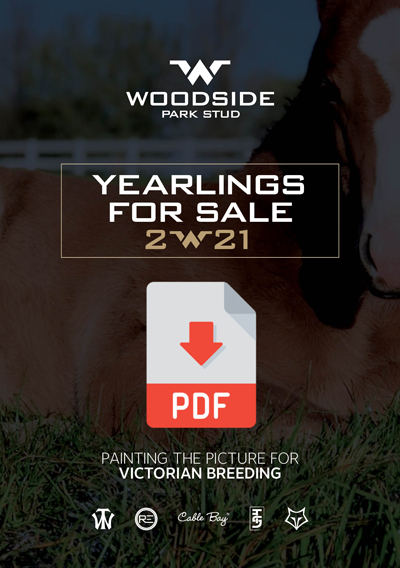 Out of the winning Not A Single Doubt mare Secret Doubt, a half-sister to the juvenile stakes performer Detective (Snitzel), the bay colt is a grandson of the G1 Railway Stakes winner Covertly, from the family of stakes winners Crack The Code, So Secret and Secret Link.

The other offering out a Not A Single Doubt mare is the colt from Hell Or Highwater, herself a Listed-winning, G1-placed half-sister to the dam of Champion 2YO Filly Tamborera.

As we head towards this coming Saturday’s G1 Caulfield Guineas, where last start G1 Golden Rose winner Ole Kirk is currently the favourite, it is a timely reminder of the success of Bel Esprit mares have when crossed with Written Tycoon.

Led by Ole Kirk, there are 12 individual winners from just 16 runners, and Written Tycoon’s 2021 yearling crop includes two bred that way, led by the Woodside Park Stud bred colt out of Bel Selene, herself a half-sister to the five-time G1 winner Mummify, from the family of stakes winners Ottoman, Southern Maid, Pestalozzi, Isaurian and Take Pride.

All in all, Woodside Park Stud will consign close to 40 yearlings in 2021, with half of them by Australia’s Leading Sire Written Tycoon, the only sire so far this season to have recorded five individual stakes winners.

The pedigree of each of Woodside Park Stud’s 2021 Yearling Sale draft can be viewed by clicking the booklet image.